Canada Gets Progressive With Its Trade Agenda

Canada Gets Progressive With Its Trade Agenda 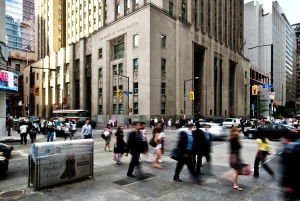 Bay St. at King St., in the heart of Toronto’s financial district [Wikimedia]

Canada has approached its recent trade negotiations with the goal of forming treaties that both benefit Canadians and advance its progressive trade agenda (hereafter, the “Agenda”). The Agenda integrates gender equality, labour standards, environmental protections, and human rights more broadly into Canada’s trade agreements.[1] Despite its potential human rights advantages, critics say the Agenda has presented a significant hurdle to Canada’s trade negotiations. It has been partly blamed for crippling trade negotiations with China, and for stalling the Comprehensive and Progressive Trans-Pacific Partnership (CPTPP, formerly the TPP).[2] The Agenda is also becoming a contentious issue in the North-American Free Trade Agreement (NAFTA) renegotiation.[3] Critics have suggested that if Canada wishes to successfully negotiate trade deals, it will need to either abandon or loosen the requirements set forth in the Agenda.[4]

The Agenda’s Principles Are Based in Progressive Policy Measures

China, which has been involved in discussions about a possible Free Trade Agreement (FTA) with Canada, has been vocal in its criticism. Chinese embassy spokesperson Xiaozhong Zhu has said, “China always maintains that non-trade issues should not be brought in the FTA negotiation no matter in what kind of name.” However, contrary to China’s hard-line approach, gender, labour, and environmental concerns have been shown by research and other trade agreements to be intertwined with trade.

The relationship between gender, economies, and trade is a growing area of economic research and policy.[5] For example, sixteen per cent of global income is lost due to gender inequality.[6] Researchers have also identified 943 laws worldwide which have an impact on the economic advancement of women.[7] When considering trade treaties specifically, it is important to note that women tend to be concentrated in different industries from men, and primarily own small and medium-sized businesses.[8] Trade agreements rarely provide the same treatment to all industries: they affect businesses in different ways, depending on both the nature of the business and its size.[9] Recognizing gender as part of trade requires that treaties acknowledge and address the unequal impact on those industries and businesses in which women are most frequently involved.[10]

Preventing a Race to the Bottom

Trade similarly affects labour and the environment. Treaty clauses in these areas attempt to homogenize standards between trading states. While this may improve standards in some countries, there are serious concerns about domestic downward pressure on standards and on circumvention.[11] For example, weak labour and environmental protections are perceived to lower operating costs for businesses.[12] Under trade agreements, it becomes more feasible for businesses to relocate operations to take advantage of lower operating costs in foreign states.[13] This strong possibility of operation migration, when coupled with a lack of labour and environmental treaty clauses, can lead to a “race to the bottom.” In such cases, countries find they must reduce their more stringent standards so as to decrease operating costs and keep their workforce and market globally competitive.[14]

On the other hand, trade agreements may allow states to limit importation where the goods or their manufacturing processes do not comply with domestic laws, including environmental and labour standards.[15] This prevents goods manufactured in countries with lower labour and environmental standards from being imported into states with more stringent standards.[16] To maintain domestic environmental and labour protections, states with higher standards, such as Canada, have included clauses on these standards in their trade agreements.[17]

Criticism of the Agenda

Canada’s own track record on the principles set out in the Agenda is spotty. On the environmental front, Canada has faced complaints before the North American Commission on Environmental Cooperation for failing to uphold its environmental laws. Canada has also been criticized for the possible Kinder Morgan Pipeline expansion. With respect to gender, inequality continues in the workplace, affecting female Canadian employees through such issues as gendered workplace violence and lack of childcare options. There has been increased non-compliance with labour law, due to low fines, lack of resources to address complaints, and the lack of a monitoring system.

Canada’s negotiating partners have also criticized Canada for imposing its values and regulations on them.[19] Many of these potential trade partners are embracing the values of the Agenda in their own ways. China is currently projected to meet its Paris Agreement goals ahead of its deadline. Mexico and the United States are party to the International Labour Organization, which sets labour standards and promotes decent work.[20] All but two states involved in the CPTPP supported the recent Buenos Aires Declaration on Women and Trade, aiming to improve economic conditions for women.[21] Canada’s efforts to include the Agenda in trade agreements, thus requiring particular action by the treaty parties, has been perceived as interference with state sovereignty.[22]

The Agenda is a statement of Canadian values and a somewhat vague effort to bring more human rights protections into Canada’s trade agreements. Critics argue that it has hindered Canada’s trade negotiations, and that it fails to provide meaningful protections. Nevertheless, it has set an important precedent for including environmental, labour, and gender standards in trade treaties, and has signalled Canada’s willingness to take these concerns seriously in future negotiations. Now, as Canada continues to promote the Agenda, it should endeavour to achieve mutual trade and human rights goals without alienating its potential trade partners.