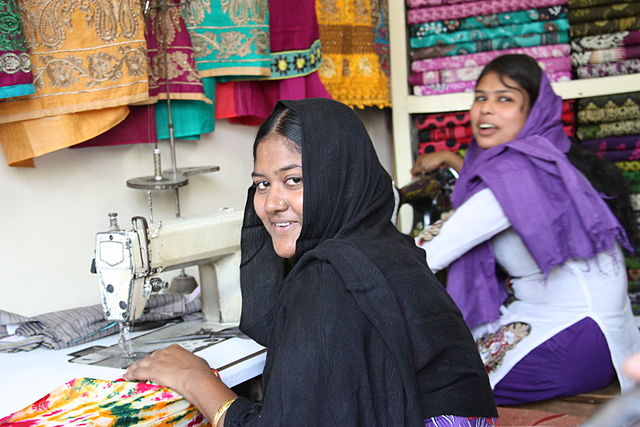 Pictured: Khaleda, a survivor of the Rana Plaza collapse, in her new job as dressmaker. [Wikicommons]

On April 24, 2013, Rana Plaza, an eight-storey garment factory in Bangladesh, collapsed, killing an astonishing 1,138 people. Aid workers searching through the wreckage found labels for Canadian brand names, including Joe Fresh apparel linked to the Canadian company Loblaw’s. Five years on, the collapse ranks as the deadliest garment factory accident ever, and one of the deadliest industrial accidents of the 21st century.

Since Rana Plaza, companies have scrambled to improve the transparency of supply chains with mixed results. For example, Canadian Tire still refuses to publish information on its supply chain. While there has been intense public pressure for greater transparency from Canadian companies, activist groups such as Amnesty International have demanded a government response.

The federal government recently announced the creation of the Canadian Ombudsperson for Responsible Enterprise, or CORE, to replace the Office of the Extractive Sector Corporate Social Responsibility, on January 17th, 2018. The latest incarnation of the corporate responsibility watchdog will have the authority to investigate Canadian companies abroad, and the power to recommend federal sanctions, such as withdrawal of consular services and services from Export Development Canada. The mandate of CORE will focus on the mining, oil, and gas, and garment sectors, and later expand to other industries. Furthermore, its advisory body will include members from civil society and industry backgrounds.

Among those who welcomed the announcement were Oxfam, Amnesty International, mining company Barrick Gold (itself subject to repeated accusations of human rights violations), and the Federal New Democrats. However, others have raised a range of criticisms. Writing in the Toronto Star, Jenifer Wells wonders whether CORE will be much better than its poorly funded and ineffectual predecessor, and expresses concern about the pace of choosing an ombudsperson. In the Financial Post, Neil Hindra expressed scepticism about CORE’s power to serve as both investigator and judge, and claims the only benefit of the new ombudsperson will go to the legal community who will profit from “frivolous lawsuits.”

Globally, other countries are experimenting with similar solutions to supply chain transparency, but Canada is one of the first countries in the world to propose such strong measures, including the power to investigate corporate conduct abroad and publish its findings. In 2013, as part of the Modern Slavery Act, Britain appointed an anti-slavery commissioner. Businesses with a turnover of more than £36 million are required to comply with the transparency requirements in the Modern Slavery Act, by publishing a slavery and trafficking statement prominently on their websites which sets out the steps the company has taken to ensure there is no slavery or trafficking in its supply chain. The commissioner does not have the same enforcement and investigative power as the proposed mandate for CORE.

This announcement comes as the Supreme Court of Canada considers hearing Araya v Nevsun (readers can find CLAIHR’s overview of the case here). In Nevsun, two Eritrean refugees have alleged they were subject to forced labour at a mine indirectly owned by Vancouver-based Nevsun Resources. The British Columbia Court of Appeal considered that “international law is in flux” and held that Canadian corporations could be liable in tort damages for breaches of jus cogens norms committed abroad.[1] This marks growing development in the law to hold corporations liable for infringements of human rights overseas. Some legal experts believe that the Ombudsperson is a better way to seek resolutions than lawsuits against Canadian Companies by the disadvantaged few who are affected.

Internationally, the situation is not much better, with only 7% of publicly listed companies reviewed by The Guardian newspaper disclosing labour problems in their supply chains. Canada currently has no legislation requiring companies to report their supply chains, and advocates have encouraged them to adopt transparency measures, like the United Kingdom’s Modern Slavery Act and the California Transparency in Supply Chain Act.

At the time of writing, the government has not released CORE’s full mandate. Time will tell whether its introduction will usher in meaningful change to enforce corporate responsibility for Canadian companies abroad.